Second, Reactive Programming is not the same thing as React, the JavaScript framework. Some people think Reactive is nothing new, and it’s what they do all day anyway, using JavaScript, and others seem to think that it’s a gift from Microsoft, who made a big splash about it when they released some C# extensions a while ago.

In a few words, Reactive Programming is a programming paradigm that deals with asynchronous data streams, sequences of events, and the specific propagation of change, which means it implements modifications to the execution environment, context, in a certain order.

The Reactive Manifesto of 2014 introduced reactive systems and their four principles. 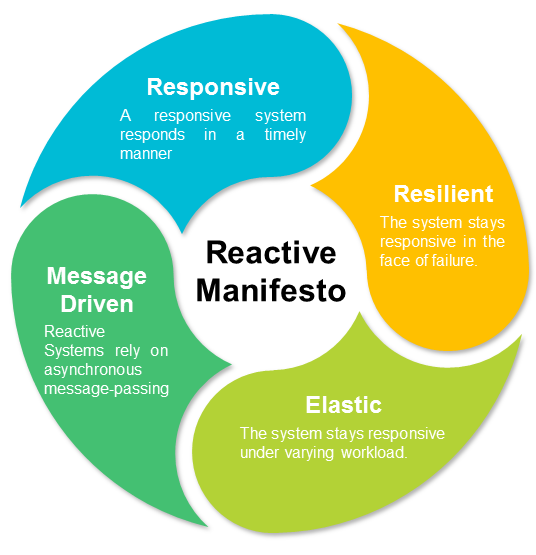 From Google I found;

Most of the Reactive Programming libraries I looked at use a model centred around “observables”. An observable is a type on which you can register “observers”, as defined in the observer pattern in the GoF book.

Objects can subscribe to a subject and get informed, whenever there is an update in the subject. Essentially, the subject maintains a list of its observers and automatically notifies them when any state is changed.

Now let’s divide Reactive programming into 3 main concepts to make it easier to understand; Asynchronous, Streams, and Propagation of change.

Asynchronous; When you execute something asynchronously, you can move on to another task before it finishes. With the reactive approach, a database call does not block the calling thread and instead returns immediately. The program is structured as an asynchronous stream of events. Simply put, you instantly move to the next task after having initiated some background effort to deal with the previous task.

Streams or Data Streams; Streams are the backbones of reactive programming, so it is necessary for you to understand what is data stream actually means. Yes, I could use my Led Strip idea to understand this.

The data stream is more of a pipeline of methods applied to the data as it passes through. In Reactive Programming, every sequence of values, data stream, is termed as observable.

Propagation of change; the streamed data has to be propagated to a consumer. Here ‘change’ refers to the transformation of data that passed through the stream. This changed or transformed data is consumed by observers who subscribed for this change.

Starting from the creation of a data stream to the end where observers receive their response, there is a wide set of ‘‘changes’’ that can be used in reactive programming.
Reactive Programming = Observable + change + Propagation to observers

There are a number of implementations of reactive programming in Java.

Reactive Programming will bring some benefits;

This is what the reactive approach is about. You wait till all async actions (changes) are completed and then proceed with further actions.

Reactive Programming is a buzzword but still not clearly defined and there are a lot of things around. To make it easier to understand one idea is to divide into 3 main concepts; Asynchronous, Streams, and Propagation of change, plus the observer pattern from the GoF book.

The Reactive Manifesto introduced reactive systems and their four principles.

Do not try to apply Reactive Programming where there is no need to.