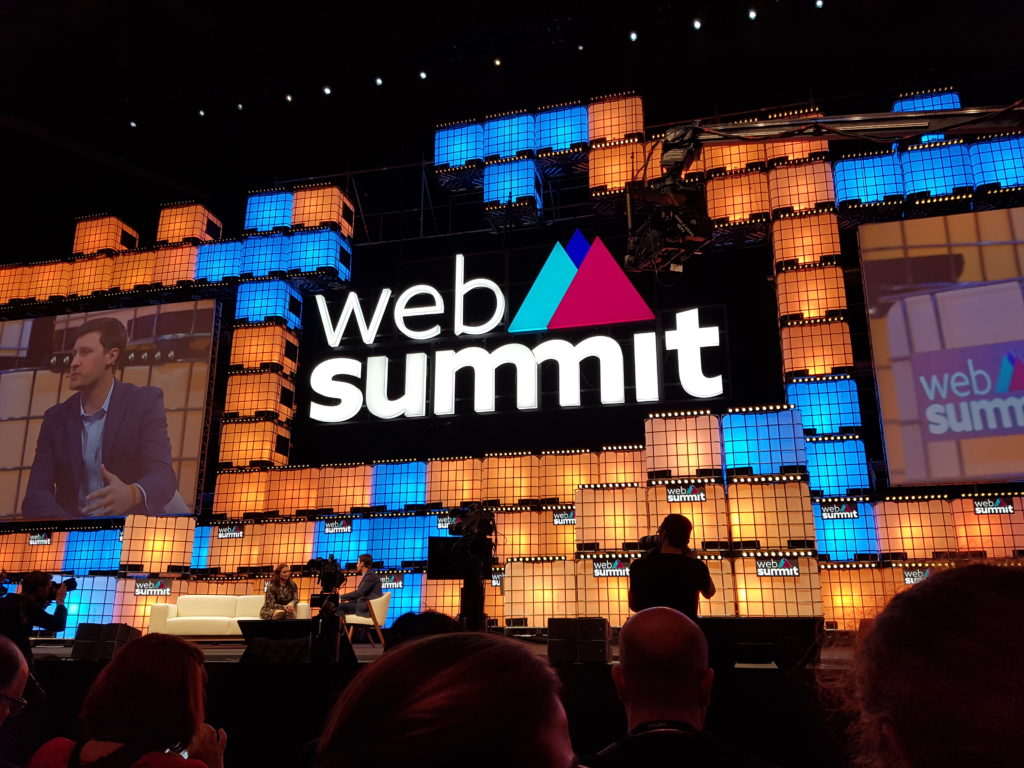 My first time at Web Summit, my first impression: it is massive and I say Massive regarding the numbers of stages (24), speakers (1200), partners, startups (1800)… but specifically regarding the number of people (70.000). We can say “it is crowded” to the point that it could frustrated visitors.

With nearly 70.000 attendees from over 160 countries, more than 1.200 speakers, over 1.800 of promising startups, Fortune 500 companies, 24 tracks to follow and over 200 employees working really hard to prepare it, Web Summit grew to be the largest technology conference in the world, and has been called the best one on the planet (Forbes), Davos for geeks (Bloomberg) and Glastonbury for geeks (The Guardian). The 2018 edition in Lisbon is over and it’s time for takeaways.

But what is Web Summit?

Well, in a nutshell, it’s something that started as a “simple idea” in 2010—to connect people in the tech community— evolved into the biggest technology conference in the world.
Or, as Web Summit co-founder Paddy Cosgrove puts it, “World’s largest gathering of entrepreneurs.”

It was my first time at the Web Summit and the most important lesson I took was that planning is key. I downloaded the official app and added some items to my schedule, but there I couldn’t follow up …

The Web Summit might be the biggest technology conference in the world, but it isn’t the most techie one for sure. The idea of this conference was to bring the tech people and industries together — and this objective is being realized year after year with great success. The Summit saw an enormous growth in attendance — from 400 people in 2010 to 70.000 this year, gathering founders, CEOs of technology companies, policymakers, heads of state and startups.

Women are more and more present in tech
This year on the Web Summit 44% of attendees were female versus 24% five years ago — this is undoubtedly an impressive and very positive change. The organizers’ attempt to make women visible as speakers and moderators were also clear, which I absolutely applaud. But does it mean almost half of the people working in tech are women? Sadly, still no. As mentioned above, the Web Summit is not the most techie conference in the world. There are attendees from fields such as web and mobile development, artificial intelligence, augmented reality, but also marketing, PR, user experience, health, tourism or project management. Some of these fields are doing much better in the parity game than tech is.

From Blockchain to AI and Shared Mobility

The range of topics was very broad: From blockchain and cryptocurrencies to artificial intelligence and machine learning, from virtual reality to autonomous vehicles and shared mobility. The conference hosted the inventor of the World Wide Web, Tim Berners-Lee, but also top managers from global tech companies, such as Apple, Google, and Netflix. Even famous politicians, such as EU Commissioner Margrethe Vestager and the United Nations Secretary-General António Guterres, were amongst the speakers. Impressed by that many inspiring talks and great conversations at the Web Summit.

So many crazy ideas were presented at the conference. Astonishingly, everything looked like it could become reality. For instance, electric aircraft, such as the Volocopter and the Lilium aircraft, which simply bypass traffic jams. Another example is robots with artificial intelligence, such as “Furhat” from Furhat Robotics and “Sophia” from Hanson Robotics, which become more and more human. Such AI-powered robots can express an increasing number of emotions and can even sense the emotions of another person. a bit scary.
Another point was the discussion about digital human rights, of which we should not lose sight. From our present point of view, we already have human rights and many countries accept them. However, with new technologies like cloud, artificial intelligence as well as autonomous systems, we not only gain lots of advantages, threats might arise as well. How can we ensure that all these technologies are used only for the good of all and that each person’s rights are accepted in a digital ecosystem? Should everyone have the right to access the Internet to educate themselves and have the same opportunities? What impact has this topic in our daily work?

Some of the world’s most influential companies have joined us at Web Summit at the beginning of their startup journey. Over the years we’ve welcomed OnePlus, Stripe, Nest, Uber, Careem, and GitLab when they were still early-stage startups, looking for funding, partnerships or figuring out their next move.

I create my list of AI and machine learning startups that I had the opportunity to see there.

Engineer.ai is a human-assisted AI engineering team that builds and operates technology projects; from new apps to managing cloud spend.

Ultimate.ai is a platform that gives customer service agents the AI tools they need to provide faster, smarter responses.

Mobacar use AI and machine learning to predict what mode of transport travelers want, instead of giving them an endless stream of transfer options from an airport.

Unbabel is an artificial intelligence powered human translation platform, with a focus on the translation of customer service communications.

But the main topic, in my opinion, was Blockchain

I list some of the notable crypto-industry related developments during the Web Summit 2018.

The world’s leading cryptocurrency wallet and Bitcoin block explorer platform, Blockchain announced its partnership with Stellar Development Foundation – the organization that issues Stellar lumens to give away $125 million worth XLM through an airdrop to event attendees. In order to receive the giveaway, attendees required to have a Blockchain wallet. The XLM fueled Stellar blockchain platform has gained a huge reputation for its speed and low-cost transactions.

Yet another digital currency platform, BTC.com, and social trading platform eToro announced a partnership to drive cryptocurrency adoption at the event. The partnership was marked by BTC.com giving away pre-loaded cards with 0.0030 BCH (roughly $2) to attendees visiting their stall. Apart from the giveaway, BTC.com’s stall acted as an information center where people can get all their questions regarding cryptocurrencies answered. eToro also announced the launch of its eToroX wallet, which will soon get additional functionalities like support for more coins and fiat tokens, crypto-to-crypto conversion, fiat deposit, and payment in-store capabilities. The first 100,000 people downloading the new eToroX wallet get to receive 0.1 ETH (approx. $21) in their respective accounts.

Not to be left behind, BitStamp also promoted cryptocurrencies by educating first-time traders on how to use cryptocurrencies. The Luxembourg based company has launched ‘Cryptomyths’, a quiz designed to make the world of cryptocurrencies clearer so first-time traders, so that they can gain in-depth knowledge of how and what to trade. Summit attendees who took part in the quiz earned a $10 trading process that will be activated when they make their first trade on the BitStamp platform.

And the best … All of the talks are available online

Not everybody knows that all of the talks from the 24 paths become available online after the conference. At the moment there are almost 300 videos from last week accessible on the Web Summit’s youtube channel. 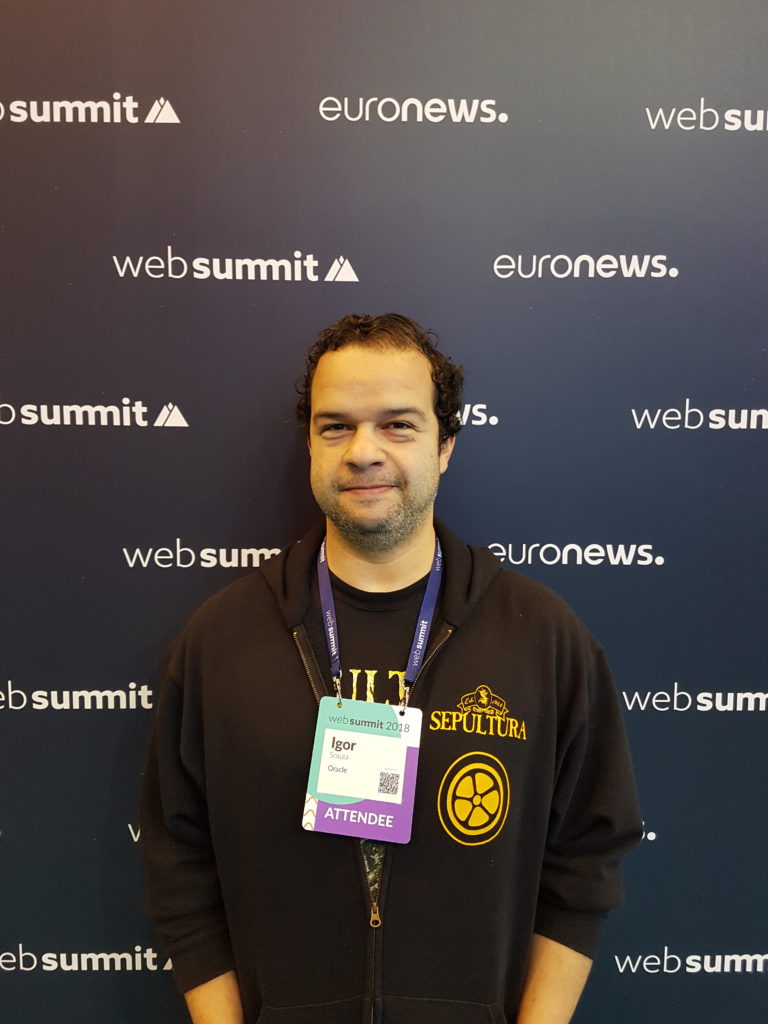