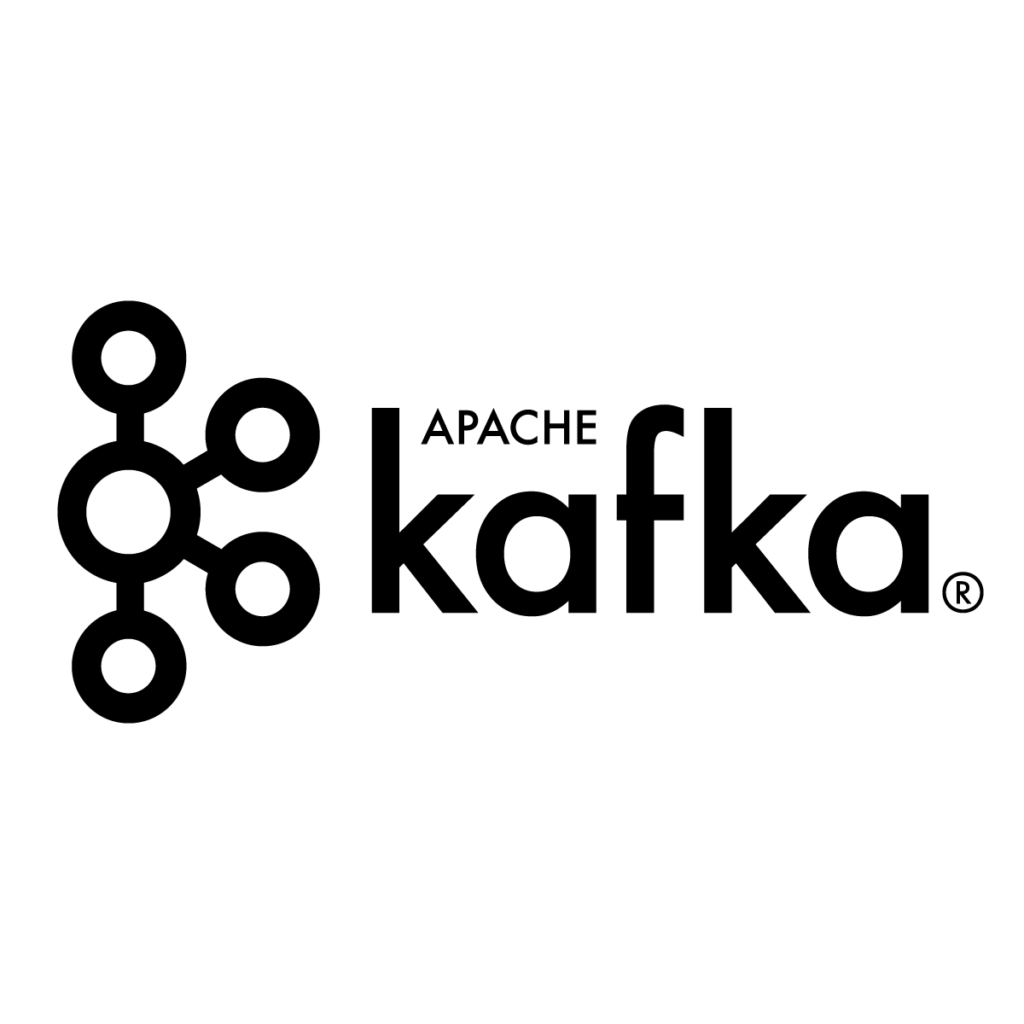 if you’re not familiar with Big Data or Data lake, I suggest you have a look on my previous post “What is Big Data?” and “What is data lake?” before.
This post is a collection of links, videos, tutorials, blogs and books that I found mixed with my opinion.

I Googled about and I found …
Kafka is designed for distributed high throughput systems. Kafka tends to work very well as a replacement for a more traditional message broker. In comparison to other messaging systems, Kafka has better throughput, built-in partitioning, replication and inherent fault-tolerance, which makes it a good fit for large-scale message processing applications.

Other …
Apache Kafka is a distributed publish-subscribe messaging system and a robust queue that can handle a high volume of data and enables you to pass messages from one end-point to another. Kafka is suitable for both offline and online message consumption. Kafka messages are persisted on the disk and replicated within the cluster to prevent data loss. Kafka is built on top of the ZooKeeper synchronization service. It integrates very well with Apache Storm and Spark for real-time streaming data analysis.

Producers produce messages to a topic of their choice. It is possible to attach a key to each message, in which case the producer guarantees that all messages with the same key will arrive to the same partition.

Consumers read the messages of a set of partitions of a topic of their choice at their own pace. If the consumer is part of a consumer group, i.e. a group of consumers subscribed to the same topic, they can commit their offset. This can be important if you want to consume a topic in parallel with different consumers.

A topic is a feed name or category to which records are published. Topics in Kafka are always multi-subscriber — that is, a topic can have zero, one, or many consumers that subscribe to the data written to it. For each topic, the Kafka cluster maintains a partition log that looks like this: 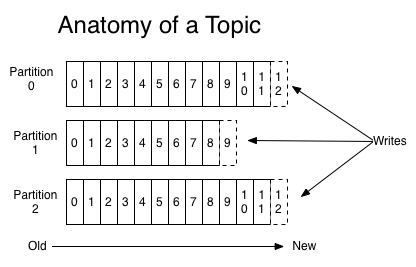 Topics are logs that receive data from the producers and store them across their partitions. Producers always write new messages at the end of the log.

Each partitioned message has a unique sequence ID called an offset. For example, in Partition 1, the offset is marked from 0 to 9. The offset is the position in the log where the consumer last consumed or read a message.

The partitions of the log are distributed over the servers in the Kafka cluster with each server handling data and requests for a share of the partitions. Each partition is replicated across a configurable number of servers for fault tolerance.

Each partition has one server which acts as the “leader” and zero or more servers which act as “followers”. The leader handles all read and write requests for the partition while the followers passively replicate the leader. If the leader fails, one of the followers will automatically become the new leader. Each server acts as a leader for some of its partitions and a follower for others so load is well balanced within the cluster.

Kafka MirrorMaker provides geo-replication support for your clusters. With MirrorMaker, messages are replicated across multiple datacenters or cloud regions. You can use this in active/passive scenarios for backup and recovery; or in active/active scenarios to place data closer to your users, or support data locality requirements.

Replicas are nothing but backups of a partition. If the replication factor of the above topic is set to 4, then Kafka will create four identical replicas of each partition and place them in the cluster to make them available for all its operations. Replicas are never used to read or write data. They are used to prevent data loss.

A messaging system is a system that is used for transferring data from one application to another so that the applications can focus on data and not on how to share it. Kafka is a distributed publish-subscribe messaging system. In a publish-subscribe system, messages are persisted in a topic. Message producers are called publishers and message consumers are called subscribers. Consumers can subscribe to one or more topic and consume all the messages in that topic.

Brokers are simple systems responsible for maintaining published data. Kafka brokers are stateless, so they use ZooKeeper for maintaining their cluster state. Each broker may have zero or more partitions per topic. For example, if there are 10 partitions on a topic and 10 brokers, then each broker will have one partition. But if there are 10 partitions and 15 brokers, then the starting 10 brokers will have one partition each and the remaining five won’t have any partition for that particular topic. However, if partitions are 15 but brokers are 10, then brokers would be sharing one or more partitions among them, leading to unequal load distribution among the brokers. Try to avoid this scenario.

When Kafka has more than one broker, it is called a Kafka cluster. A Kafka cluster can be expanded without downtime. These clusters are used to manage the persistence and replication of message data.
Multi-tenancy
You can deploy Kafka as a multi-tenant solution. Multi-tenancy is enabled by configuring which topics can produce or consume data. There is also operations support for quotas. Administrators can define and enforce quotas on requests to control the broker resources that are used by clients. For more information, see the security documentation. 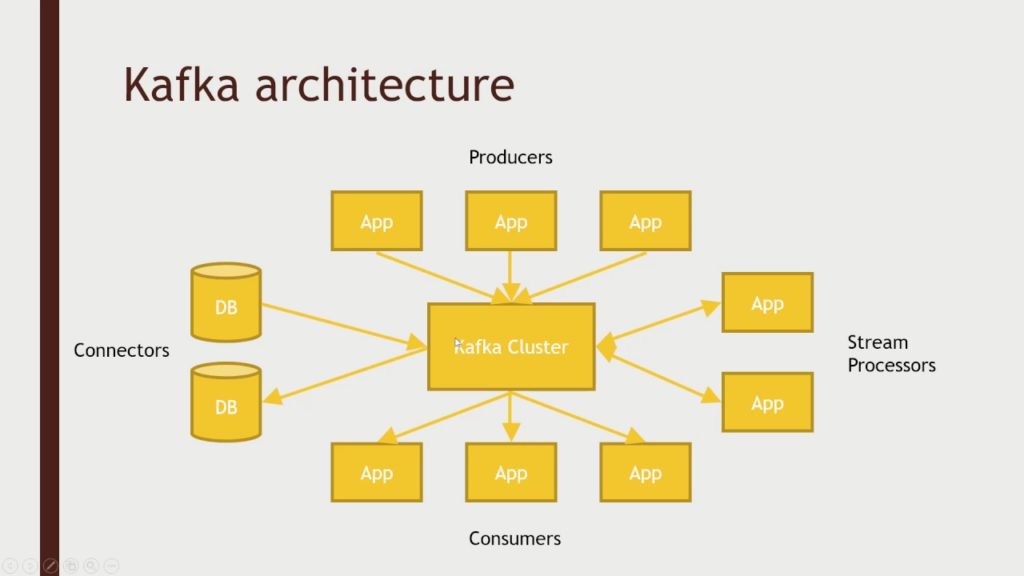 Apache describes Kafka as a distributed streaming platform that lets us:

Kafka was developed around 2010 at LinkedIn by a team that included Jay Kreps, Jun Rao, and Neha Narkhede. The problem they originally set out to solve was low-latency ingestion of large amounts of event data from the LinkedIn website and infrastructure into a lambda architecture that harnessed Hadoop and real-time event processing systems. The key was the “real-time” processing. At the time, there weren’t any solutions for this type of ingress for real-time applications.

There were good solutions for ingesting data into offline batch systems, but they exposed implementation details to downstream users and used a push model that could easily overwhelm a consumer. Also, they were not designed for the real-time use case.

Kafka was developed to be the ingestion backbone for this type of use case. Back in 2011, Kafka was ingesting more than 1 billion events a day. Recently, LinkedIn has reported ingestion rates of 1 trillion messages a day.

In Big Data, an enormous volume of data is used. But how are we going to collect this large volume of data and analyze that data? To overcome this, we need a messaging system. That is why we need Kafka. The functionalities that it provides are well-suited for our requirements, and thus we use Kafka for:

Why is it so popular?

RedMonk.com published an article in February 2016 documenting some interesting stats around the “rise and rise” of a powerful asynchronous messaging technology called Apache Kafka.
https://redmonk.com/fryan/2016/02/04/the-rise-and-rise-of-apache-kafka/

Kafka has operational simplicity. Kafka is to set up and use, and it is easy to figure out how Kafka works. However, the main reason Kafka is very popular is its excellent performance. It is stable, provides reliable durability, has a flexible publish-subscribe/queue that scales well with N-number of consumer groups, has robust replication, provides producers with tunable consistency guarantees, and it provides preserved ordering at the shard level (i.e. Kafka topic partition). In addition, Kafka works well with systems that have data streams to process and enables those systems to aggregate, transform, and load into other stores. But none of those characteristics would matter if Kafka was slow. The most important reason Kafka is popular is Kafka’s exceptional performance.

A lot of large companies who handle a lot of data use Kafka. LinkedIn, where it originated, uses it to track activity data and operational metrics. Twitter uses it as part of Storm to provide a stream processing infrastructure. Square uses Kafka as a bus to move all system events to various Square data centers (logs, custom events, metrics, and so on), outputs to Splunk, for Graphite (dashboards), and to implement Esper-like/CEP alerting systems. It’s also used by other companies like Spotify, Uber, Tumbler, Goldman Sachs, PayPal, Box, Cisco, CloudFlare, and Netflix.

Why Is Kafka So Fast?

Kafka relies heavily on the OS kernel to move data around quickly. It relies on the principals of zero copy. Kafka enables you to batch data records into chunks. These batches of data can be seen end-to-end from producer to file system (Kafka topic log) to the consumer. Batching allows for more efficient data compression and reduces I/O latency. Kafka writes to the immutable commit log to the disk sequential, thus avoiding random disk access and slow disk seeking. Kafka provides horizontal scale through sharding. It shards a topic log into hundreds (potentially thousands) of partitions to thousands of servers. This sharding allows Kafka to handle massive load.

Four main benefits of Kafka are:

Kafka can be used in many Use Cases. Some of them are listed below

Kafka: The Definitive Guide is the best option to start.

Kafka Architecture and Its Fundamental Concepts

What to consider for painless Apache Kafka integration